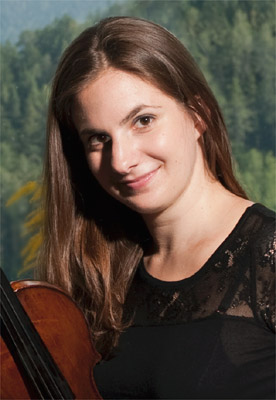 Shana Douglas’s recent performances include an appearance in Duke’s Hall at the Academy of Music in a Rising Stars series, a performance of both Shostakovich Piano Trios in Barbican Hall, concertos by Barber, Beethoven, Brahms, Dvořák, and Mozart with orchestras in the UK and the USA, and a recital in the Molière Hall in Lyons, France. Shana earned her Bachelors Degree in May of 2006 from the Curtis Institute of Music in Philadelphia, where she studied for five years as a student of Ida Kavafian and Arnold Steinhardt and was the recipient of the Harry Springman Memorial Fellowship. Following her graduation from Curtis, Shana moved to London to pursue studies with David Takeno at the Guildhall School where she spent three years as a Guildhall Artist Fellow, after first receiving her Masters Degree with Distinction in 2007.

Shana has been featured as a soloist with orchestra twice at the Kennedy Center in Washington, D.C., and has also performed a full solo recital on the prestigious Dame Myra Hess Recital Series which took place in Chicago’s Cultural Center and was broadcast live on television and radio. She has also performed alongside a distinguished line-up of violin virtuosos including Maxim Vengerov and Mark O’Connor in a benefit concert at the Apollo Theater in Harlem, New York, at the invitation of Arnold Steinhardt. An avid chamber musician, Shana has collaborated with renowned artists such as Atar Arad, James Clark, Roberto Diaz, Gil Kalish, Kim Kashkashian, Ida Kavafian, Charles Owen, and Steven Tenenbom.

Shana began her violin studies at the age of four, and her pre-college teachers included Teri Einfeldt, Brian Lewis, and Philip Setzer. She has performed in masterclasses for Shmuel Ashkenasi, Ana Chumachenco, Dorothy DeLay, Pamela Frank, Andras Keller, Cho-Liang Lin, Gyorgy Pauk, Eszter Perenyi, Gerhard Schulz, Joseph Silverstein, and Christian Tetzlaff. Shana twice attended the Ravinia Festival’s Steans Institute for Young Artists, where she studied chamber music with Miriam Fried, Paul Biss and other distinguished artists, and earned the loan of the festival’s prized Gagliano violin for two years. She studied with David Cerone and David Updegraff at the Encore School for Strings in Cleveland, Ohio for five summers, where her string quartet twice captured the festival’s only student prize, the Kay Logan Chamber Music Award. Other summer festivals that she has attended include the Sarasota and Kneisel Hall Chamber Music Festivals, and the IMS Prussia Cove masterclasses and Open Chamber Music sessions. Shana is also the Artistic Director of the Accord et a Cordes Chamber Music Festival, which takes place in the South of France every August.

In addition to fulfilling her busy solo and chamber music concert schedule, Shana frequently performs as a guest player with the top English Orchestras. She has appeared as Concertmaster of the Bournemouth Symphony Orchestra and the English National Opera, Assistant Concertmaster of the Philharmonia Orchestra Royal Philharmonic Orchestra. She also regularly works with the London Symphony Orchestra and the Academy of St Martin-in-the-Fields.