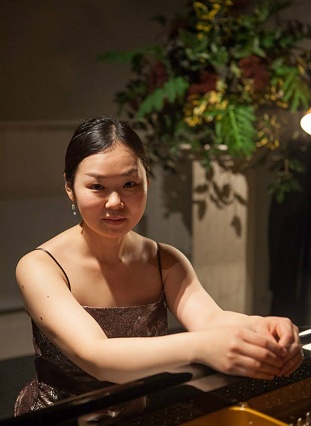 Miwako Miki was born in Japan in 1985 and gave her first public performance in Kansas City (USA) at the age of seven. She went on to win third prize in the Chiba Piano Competition in Japan, and first prize at the Student Music Concours of Japan, which is one of the country’s biggest competitions for young musicians.

From 2003 to 2007, Miwako went to the Mozarteum Summer Academy in Salzburg, where she studied with Professor Frank Wibaut. Having completed her undergraduate studies at the Geidai, Tokyo’s National University of Fine Arts and Music, Miwako moved to London to continue her studies privately with Professor Wibaut, and she recently obtained a Distinction in her Master’s degree at the Royal Northern College of Music under his tutelage. In 2009, she won prizes in the Norah Sande Award Piano Competition in Eastbourne and the President’s Prize Competition of the North London Festival, where she was awarded the Premier Challenge Cup; and in 2010 she won second prize in the North London Festival’s prestigious Emanuel Trophy Competition, which is open only to the top prizewinners of other UK music festivals. Soon afterwards, Miwako was awarded an Honorary Fellowship from the London College of Music after giving a private recital at Fairlight Hall in Hastings. Following these successes, she has received many invitations to perform in the UK and in Japan, including broadcasting live on BBC Radio 3’s “In Tune”, and a full evening’s performance at the Bemrose Bursary Recital.

We were delighted to have Miwako join us again to play Beethoven's Third Piano Concerto in 2014.